As is typical, Linda did not enter the aviation business after graduating from college. Armed with a B.S. in business administration from the College of St. Elizabeth (where she glimpsed planes at nearby Morristown Airport), Linda’s first career opportunity was as an accountant in Princeton, NJ.

On weekend excursions Linda would pass a “Learn to Fly” sign. This ignited her interest in flying. A $10 introductory flight at Robbinsville Airport was her next step. When the flight was over, she signed up for lessons! Linda earned her private pilot certificate in 1981. By 1983 she’d added her instrument rating and commercial, CFI and CFII certificates. She started instructing at Robbinsville.

In the early 1990s, Linda affiliated with the Ninety-Nines and took up aerobatic flying. Soon after, she bought a Cessna Aerobat, incorporated Aero Safety Training, Ltd., and started teaching spin awareness, basic aerobatics and tailwheel transition courses. This lead to the merging of the two flight schools, Aero Safety Training and Lincoln Park Aviation under her ownership.

In 1994, 1995, 2003 and 2004 she competed in the Air Race Classic, a an all-women 2200-mile cross-country air race. With help from the Ninety-Nines’ Amelia Earhart Scholarship, she earned her ATP rating in 1995. In 1999, Linda was the first instructor in the state of New Jersey to earn the designation of Master Instructor. Linda served as an FAA safety counselor and is currently a FAASTeam representative. Linda was the 2009 instructor of the year for the Teterboro FSDO. She’s served as governor of the New York-New Jersey Section of the Ninety-Nines, and president of the Lincoln Park Pilots Association.

In February 2010, she was selected as one of 10 winners in a nationwide “Make Mine a Million Dollar Business” contest sponsored by American Express and Count Me In. 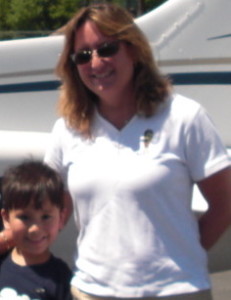 I had never been in a small airplane when I decided to go to college to become a professional pilot.  My parents thought I was crazy when they dropped me off at the campus of Embry Riddle Aeronautical University.   To their surprise, four years later I graduated with my Bachelor of Science in Aeronautical Science and my single-engine CFI/CFII rating.

I joined Linda’s team when she first opened her doors in 1995 and, although I have moved away I have been back on her team for the past 10 years.

I am a long time member of the Ninety-Nines and, after receiving two scholarships to finance my MEI and ATP I am now the Amelia Earhart Scholarship Chairman for the NY/NJ Section.

My professional pilot career has been a series of progressive flying jobs that has made me the professional pilot I am today.  I feel very fortunate to have such a diverse background.  To summarize I have been a cargo pilot, charter pilot, United Airlines pilot and Corporate pilot. I hold many type-ratings including CASA212, Citation, Falcon, Boeing, Challenger and Gulfstream aircraft.  For the past eight years I have been flying as a Captain for Pepsico Aviation in a Challenger 604 and Gulfstream IVSP.

All the while my passion for instructing remains.  Although I am only available on a part-time basis I feel like instructing is the most rewarding flying occupation I hold.  I have met life-long friends and I truly continue to learn every day.  It is such a pleasure to work with Linda and her team!

In my spare time I love to spend time with family.  My son has been flying with me since he was 8 weeks old and he looks forward to obtaining his license at AeroSafety Training. (as soon as he can reach the pedals!)  We like to ride bikes, snowboard, swim, vacation at LBI and fly!