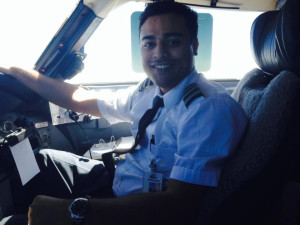 Join us in welcoming flight instructor Harold Johny to the team! Harold aspired to be an airplane pilot at the early age of 3, and now he’s living the dream! He was fascinated by flight every time he’d go on vacation while living in Oman during his childhood years. Later, Harold decided to make flying his profession and to become an airline pilot.

Harold’s flying career began after he attended Parsippany High school in New Jersey. He also attended Delta Connection Academy in Florida, where he earned a diploma in the professional pilot program; this included his Commercial/CFI/CFII/MEI as well as his AGI/IGI ratings. Later, Harold earned his Bachelor of Science degree in Aviation Flight Technology from Thomas Edison State College. While attending college, Harold completed a flight operations internship with regional airline ExpressJet Airlines, which further supported his aviation experience.

Harold has worked at multiple Part 141 and Part 61 flight schools in Florida and New Jersey.  He also has experience at both Part 135 and Part 121 airlines and spent some time working for a pair of United Express airlines. Harold is type rated on the Saab 340 and ERJ 135/145 aircraft. He is presently Airline Transport Pilot-rated and works as a First Officer for US Airways Express, flying the CRJ 200 Aircraft.

Join us in welcoming Harold to the Aero Safety Training team!

This entry was posted in AeroMail newsletter and tagged welcome. Bookmark the permalink.