David Simpson will be our guest speaker and demonstrate his Hydrodynamic Flight Simulator!

Visualizing How an Airplane Flies: A Hydrodynamic Flight Simulator

This workshop may be the most unusual and yet the most memorable illustration of how an airplane flies that you’re likely to encounter. Since the beginning of the modern era, there has been a need to simulate flight. Simulators allow scientists and engineers to model the behaviors of an aircraft or its components before building them. Indeed, the Wright brothers and other inventors of the time built wind tunnels to model the behavior of an aircraft’s wing in flight. Now, using only water to represent energy (potential energy being fuel and altitude; kinetic energy being air speed), as well as some levers, pulleys and tubing, students will be able “fly” the simulator; to learn and control with real time feedback the dynamic relationship between power and pitch and the four forces acting on an airplane in flight (thrust, drag, lift and gravity). 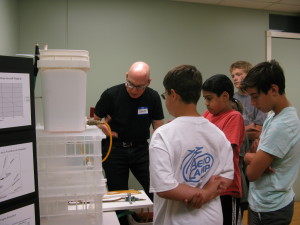 A lifelong New Jersey resident and licensed pilot, David Simpson has been teaching tech to kids since he was in 12th grade. He’s developed hands on educational programs for groups like the Girl Scouts and Boy Scouts as well as institutions like the Liberty Science Center in New Jersey and the International Spy Museum in Washington, DC. He’s been a mentor with a number of groups that have STEM education at their core, including FIRST Robotics and the Civil Air Patrol (CAP) and has been twice named CAP’s New Jersey Aerospace Education Officer of the Year. Simpson has contributed numerous how to articles to O’Reilly Media’s Make Magazine and has exhibited at Maker Faire on both the east and west coasts. He is the Founder of Innovators Inc., a startup focused on bringing cool and fun hands on STEM experiences to children in a retail setting.

You have Successfully Subscribed!

This entry was posted in Announcements/News, Events, Youth Programs. Bookmark the permalink.